Breathtaking 1956 Maserati 150S ‘Wowed’ the Crowd in the Featured Class. 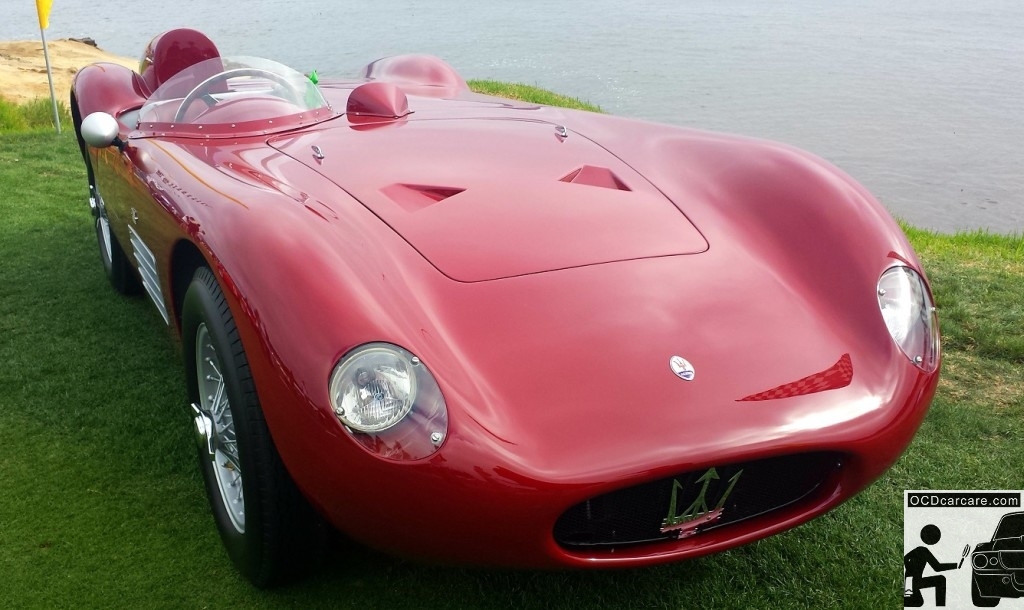 Everyone who embarks on a hobby, sport, or business begins with a passionate Vision. It is attached to an image, or ultimate goal at the forefront of their inspiration. Eventually, small steps are taken toward that goal, which transform small progressions to miles walked on the  road to achieving that vivid original vision.

For hobbyists that goal could be completing a rare task. For athletes it could be earning a college scholarship playing the sport they love. And for those in business; living the dream would be earning a living in the industry that that brings a smile to their face and a spring in their step.

In the automotive and detailing world, only a handful of events could be considered ‘the ultimate venue.’ Such events exhibit the long hard hours of toil and labor which were poured into every meticulously maintained vehicle.

These few events/venues completely captivate the hearts and minds of enthusiasts, while providing ample motivation for high-end detailers to constantly improve their skills for world wide arenas.

For a sports comparison, these events could be compared to the world cup or super bowl caliber type of display. While brief, they command the attention of the entire automotive world for a few precious hours or even days. Of these events, perhaps the most prestigious and famed is the Pebble Beach Concours d’Elegance.

This classic car show started in 1950 and is known for showcasing many of the rarest, oldest, and best kept vintage vehicles in the entire world. Sorted in either the pre or post WWII groupings, entrants are further divided by categories of manufacturer, time period, coach builder, type, country of origin. All vehicles are judged on elements of authenticity, vehicle history, function, and style.

Fantuzzi is the body style, named after a famous bodybuilder. While Monoposto means one seater.

The 150S is a factory spec race car. In automotive design terms this makes for a unique body compared to modern vehicles, as it only has one very small door for entry and it is a right hand drive.

Very few cars exist in the world which are a single panel design. With its sloping quarter panels and its sweeping curves its makes for a beautiful piece of automotive art.

A distinct feature which contributes to the beauty of classic cars, such as this Maserati 150S, is the large curving body panels. In fact, the 150S has no independent body panels. Instead, the body sections flow into one another, creating a seemingly singular seamless piece of art.

In the first days August of 2014, OCDCarCare Los Angeles was honored to travel and work alongside Scott Nichols of Distinct Detail in Scottsdale, Az. Together we prepared the 1956 Maserati I50S Fantuzzi Manoposto for The Concours d’ Elegance on the lawn at Pebble Beach.

This beauty was featured in the featured 100 years of Maserati Class. For those unaware, Scott Nichols is no stranger to Concours competitions. He has been competing and winning prestigious events for a number of years now. In 2014, vehicles under his meticulous care won their class at Amelia Island and the Arizona Concours. In 2013, a 1953 Aston Martin DB2/4 Bertone Spider, #1 of 3, won its class and was Scott’s inaugural entry at Pebble Beach. Therefore, to be invited to assist in preparaing a vehicle for a Pebble Beach featured class entry was a great honor and privilege. 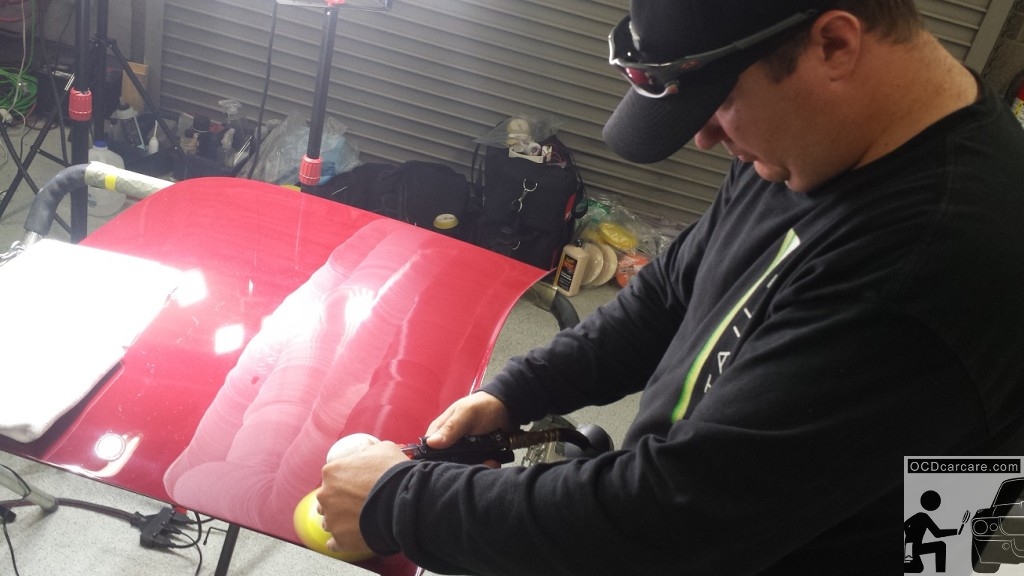 The 150S was entirely prepared using a wide array of Meguiar’s products and the Rupes Bigfoot Machines. Meguiar’s compounds and polishes were used to refine the surface clarity, restore super high gloss, and grant it superior definition of image. Rupes wide range of bigfoot machines were perfect tools for the large areas and the small panels and cervices.

Overall, the paint correction process was straightforward. One heavy compounding phase, followed by a series of progressively finer polishing phases, lead to a triple wax application. Scott and I split the car down the middle and each took a side. A few areas that required a small amount wet sanding, but overall, the paint was in fine shape to polish out.

After the paint was finished to near flawlessness, we tackled the undercarriage, wheel wells, engine, interior and other exterior areas. We spent the majority of time mirroring one another, performing the same process on opposite sides of the car. However, we were in constant contact and helped each other whenever necessary. It was a complete collaborative effort.

These unique and beautiful body lines helped contribute toward a sense of continual joy of preparation. It was a labor of love to go through the many in-depth processes, finishing every curve and contour of this Italian stunner. Everything culminated in a finished product that made the body glow with the aura of angel. With life like reflection of anything and everything within close proximity.

Commonly, throughout the stages of polishing, comments could be heard;  “WOW!” or “I can’t wait to see her against the lawn.” But little did we know, that after we finished up and loaded that brilliantly shining beauty into the trailer, that our polishing work was going to have another small road bump, before we could sign off on allowing her to enter the pristine lawn on Sunday morning.

Preparing for the Saturday Tour d’Elegance: Before & After

When the little beauty arrived to Pebble she was coaxed out of her trailer for a series of mechanical tests.

We also gave her a gentle wipe down to maintain her beauty for her upcoming seaside driving date: the Tour d’Elegance.

The Tour d’Elegance is a 70 mile road rally for entrants being judged in the Concours d’ Elegance. It is a mechanical road test of the vehicle which offers valuable points to vehicles competing in their classes. Many classes have been decided by the tour’s attributed points.

The tour combs the Monterey coastline, local cities, and includes portions of the Laguna Seca Raceway.

After the tour the 150S ‘required‘ a secondary final polish– at least by our standards. We needed to remove the many small imperfections caused by the 100+ cars driving alongside one another.

This final polish was performed within the tightly confined, yet completely environmentally controlled, transport trailer. For a combined 20 hours more, the paint was scrutinized with a finish polish, inspected, and again triple waxed into the wee hours of the Sunday morning. 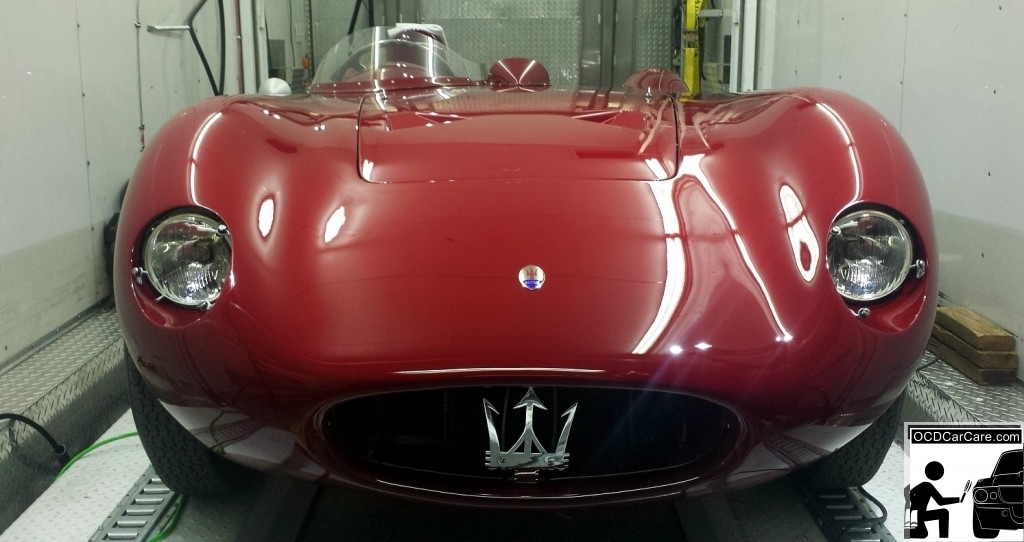 In the Transport trailer, with barely 2ft. cleareance, the 150S was entirely repolished after the Tour d’Elecange into the wee early hours of Sunday morning.

A Glimpse into Detailing Preparation for a Concours Competition

Here are a few shots that capture the intricate detail of a full Concours Competition style Detail.

As you can see NO area, no matter how big or small, on the 1956 150S Maniposto was left untouched: 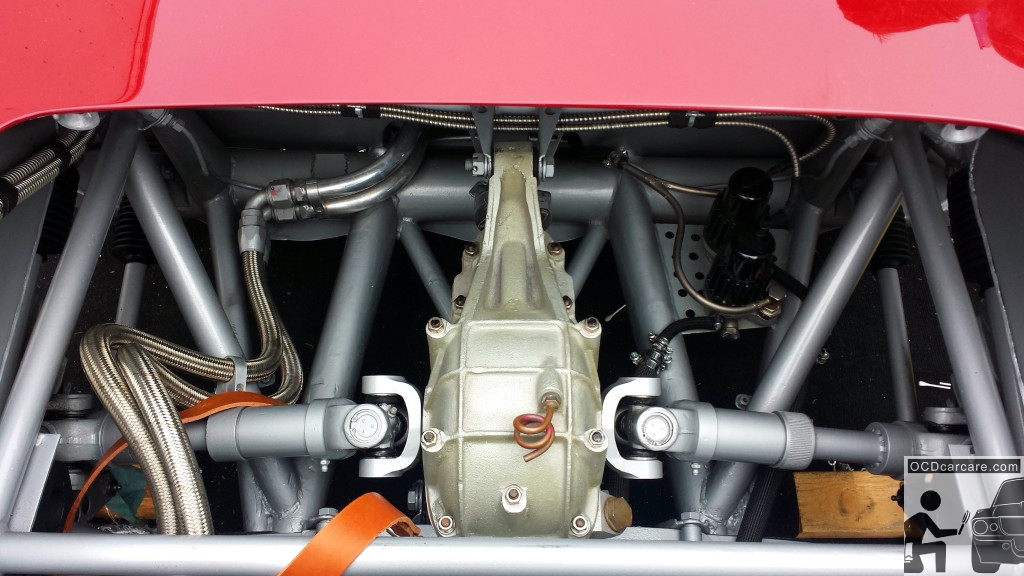 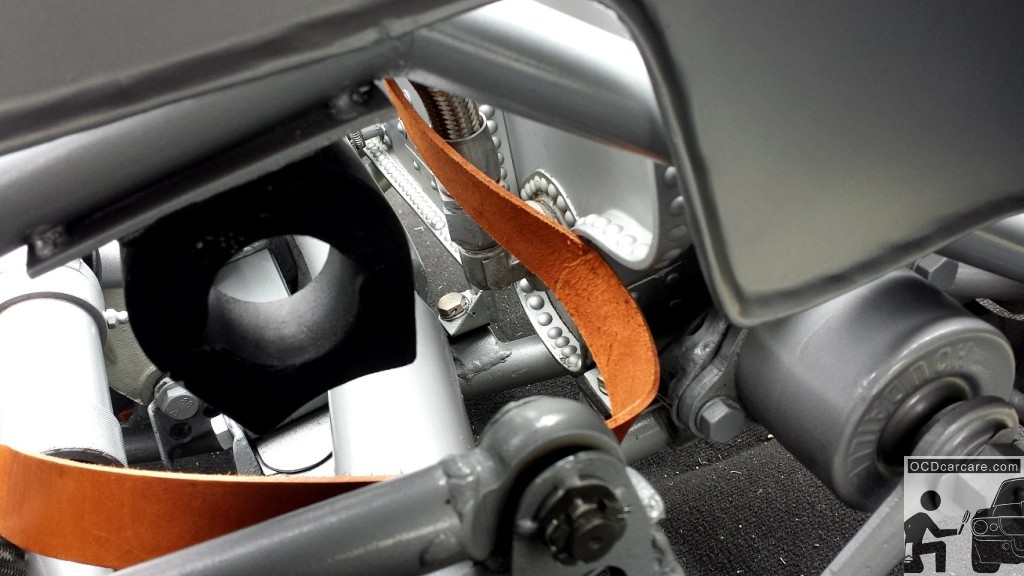 So after all was said and done, the big day–the Concours d’ Elegance– hosted on lawn of the 18th hole of the Pebble Beach golf links, was only a few hours away.

On this journey, this little Maserati race car transformed into a Italian goddess.

Her dark sultry shade of burgundy glowed when juxtaposed against the back drop of immaculately trimmed green grass and the crashing blue and white surf of the Pebble Beach coastline. 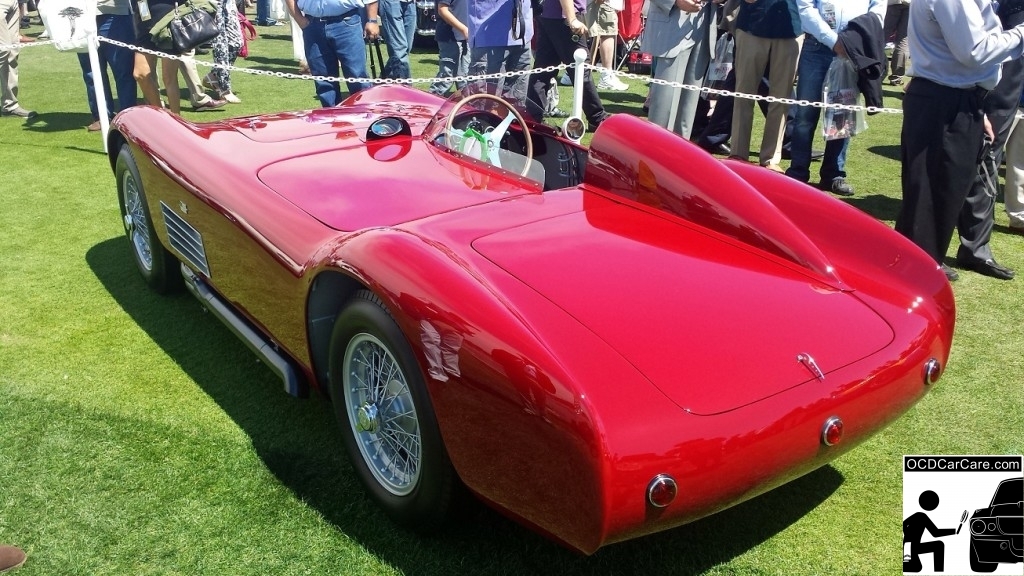 Christopher Brown, of OCDCarCare, kneels beside the 1956 Maserati 150S at Pebble Beach.

In the end, there were a little over 130 hours invested in the paint alone; transforming this former race car into a Pebble Beach Concours beauty.

Each process, no matter how small, amazingly seemed to improve the one before it, bringing the paint closer and closer to the final stage.

With much care and attention, three coats of a highly concentrated carnauba wax were applied to all exterior surfaces. The car was such a joy to work on that the long working hours were lost to a state of polishing euphoria.

Boy did she clean up beautifully!

The crew who worked on all of the mechanical systems and history of the 150S deserve a loud resounding thank you.

The crew headed by DeWayne Samuels, consisting of Rich Heinrich, Steve Loy, and Nick Siegfried worked nearly day and night for four months restoring this car. Every bit of the car was disassembled, inspected, repaired or replaced if need be, cleaned, then reassembled, piece by piece, in effort to get her in top concours condition.

Their constant assistance, teamwork, and unrelenting spirit (and willingness to have a good time – WHILE always working away) was the backbone behind all of the results seen here.

Although, I spent only a mere fraction of time on the car as the rest of the team, it was easy to understand how these seasoned professionals could pull off deconstructing an entire car while maintaining an uber quality work for so many long restless hours. It, once was again, my esteemed honor to assist this fun and hard-working team of talented gentlemen.

Most of all my sincerest gratitude must be given again to Scott Nichols of Distinct Detail for entrusting me to work alongside him on such a beautiful piece of automotive art.

The Pebble Beach Concours d’ Elegance is a once in a lifetime experience for many detailers, and it is the social event of the year for many motor heads, enthusiasts, and vintage collectors alike. Therefore, to be included in the preparation of Scott’s second entry for the Sunday lawn at Pebble Beach was assuredly my humble honor and pleasure. 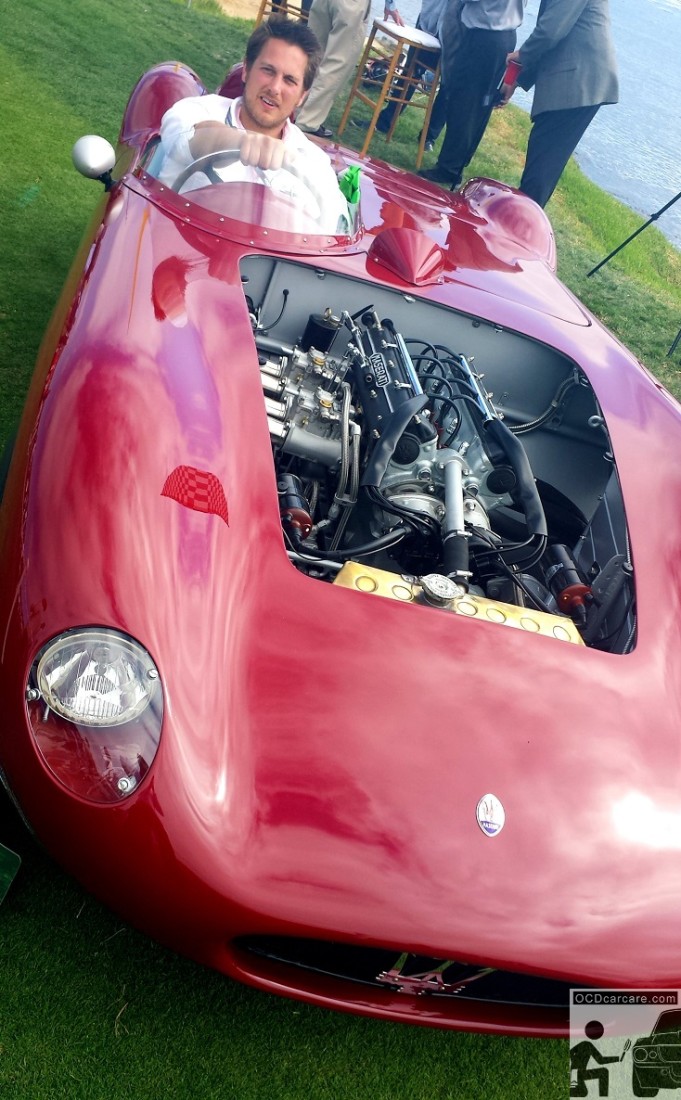 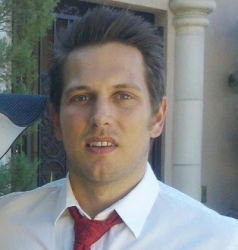 Follow Us
Latest posts by Christopher Brown (see all)